Taka is the one-eyed wonder of our kennel, she got a thorn through her cornea and the corneal transplant did not take leaving Taka with only one eye. After losing her eye Taka has gone on the Win a Derby, earn her MH Title, Qualify for the Master National, Jam in a Qualifying Stake and Complete all 6 series of the 2014 Master National in Corning, CA. Unfortunately, Taka did not earn a Qualifying Score at the Master National but for a 2 Year Old, 1 Eyed Dog you could not ask for anything more. Taka is an absolute wonder to watch work and marks better than most two eyed dogs. Taka is a true team player and runs Magnificent Blind Retrieves. Taka's Dam won the Open on the Same day that Taka had her Derby win. I believe that this girl is going to make more than an eye or two turn and many mouths drop open with her graceful style, calm line manners, and incredible drive. I call Taka my one-eyed wonder because "I will always will wonder how much more amazing she could possibly be with both eyes?" 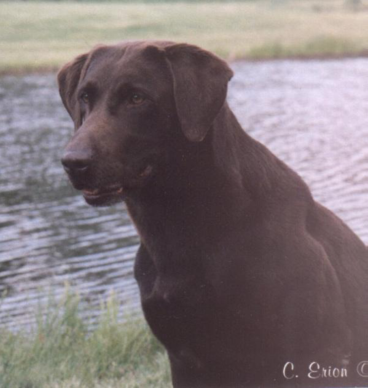 Taka is the daughter of the '08 NFC FC Two Rivers Lucky Willie who was also a 2011 National Open Finalist. Taka's Dam is FC AFC Pinehurst's All That Jazz who Qualified for the 2013 National Amateur and is the daughter of FC AFC High Tech CEO x HRCH Rascal's Chocolate Pie MH who is from the only Chocolate NFC in History '96 NFC AFC Storm's Riptide Star x FC AFC HRCH Gator Pt's Sweet Potato Pie and is the best chocolate Dam of Titled Offspring in history since her Dam. She already has 10 Titled and QAA Offspring, 1 GRCHRCH, 8 Offspring on Derby List, 11 HRCH & MH, & 4 Running Open & Amateur Currently.

HUNTERS TALK TO ME GOOSE 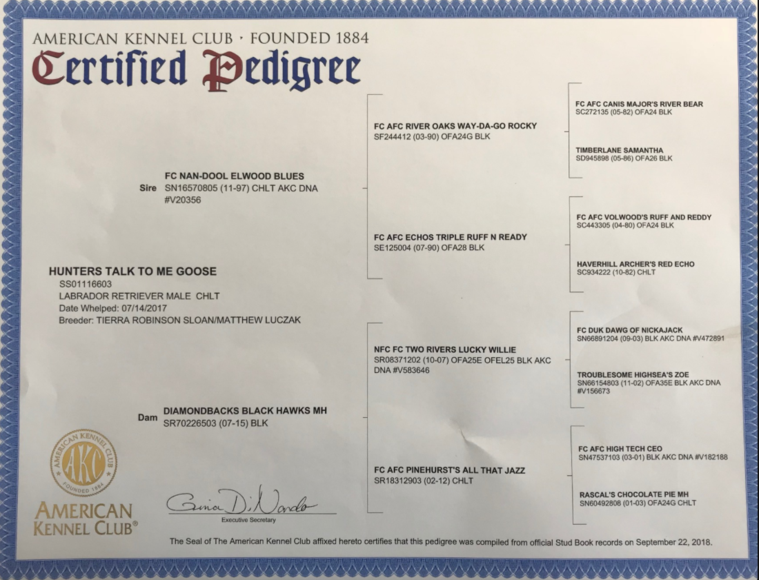