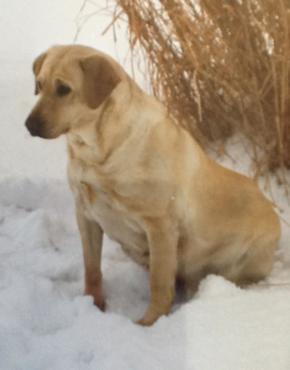 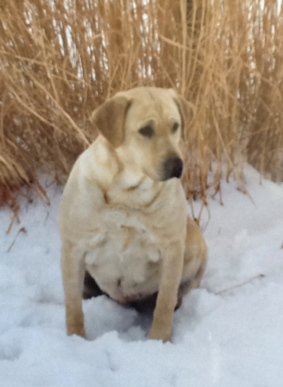 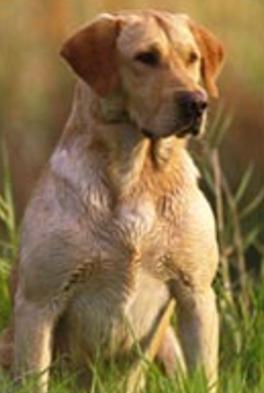 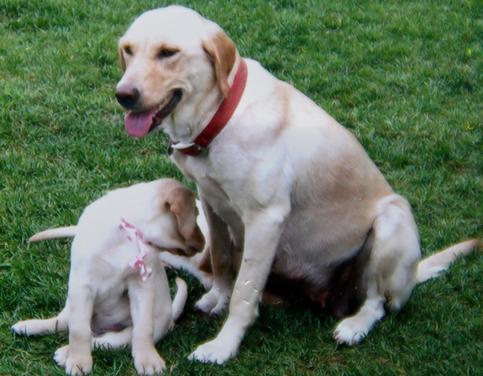 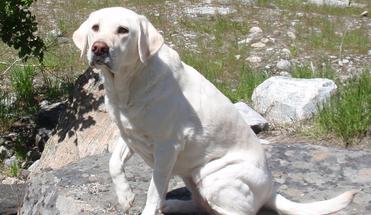 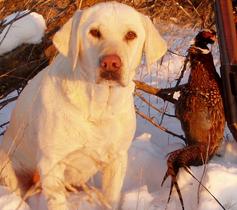 Photo on a dog food bag,

Photo from her last NAHRA Invitational when she was

last named All American at age 12, 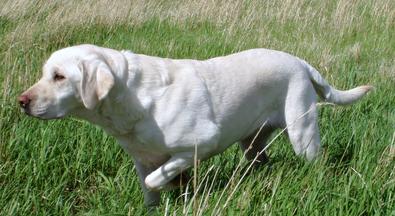 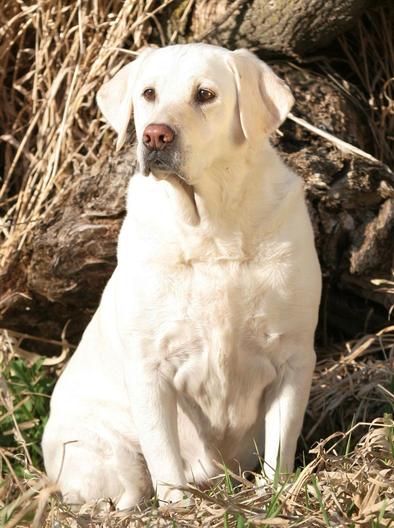 Belle. She was truly a once in a lifetime dog that people who saw her work or hunt would be the first to tell you. She was one fo those gifted animals that I was most fortunate to bond with at the highest level. Fortunately I have multiple generations of her offspring so she's not lost.
She could smoke any venue hunt tests at the highest level across the country
and win tournaments anywhere also.  Sometimes she'd have to switch gears
from day to day.  We have an entire room full of plaques, trophies, and
ribbons just from her!    Dan Hove 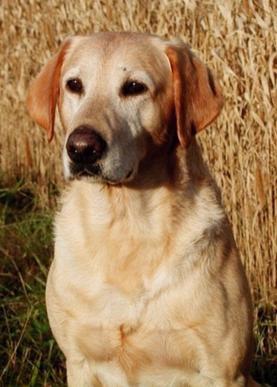 "Raider" GMPR MHR Rik's Risky Raider SH MH  ''Raider"
2001 US Open Pheasant Championship - Open Class Winner
Raider was brought to us at Holzinger Kennels (located at the MN Horse and Hunt Club) in 1995 to be trained as a gun dog for owner Rick Gerth. When I started training Raider on advanced handling, it quickly became apparent that this dog had what it took to become something very special in the Labrador world. His qualities included an intense retrieving drive, relentless perseverance, strong natural point, very trainable, stylish, bold looks, good bloodlines and an awesome temperament.
I contacted Karen and Matt Cashman (co-owners with me in Cashzinger stud dogs) to consider Raider in the stud dog program. A co-ownership agreement was made with Rick Gerth to advance Raider's training program; to promote hunting titles on him and eventually have him become one of our new stud dogs. As the Cashmans and I went to work, Raider's talents continued to excel as he went on to acquire his Senior in 5 of 5 passes and Master title in 5 of 5 passes in AKC hunt tests, Master in NAHRA (North American Hunting Retriever Association).
I continued to run Raider in APLA (American Pointing Lab Association) to achieve his CP, Master and Grand Master titles. Raider won the 2001 US Open Pheasant Championship - Open Flusher Class Running with me and Todd Haferman. Raider and I also won the Cabela's Sportsmen's Quest Top Gun Class.
Raider's lineage descended from the American and British Field trial bloodlines, and has five generations of US Open Pheasant Championship winners. He is well known for consistently throwing his exceptional qualities into his offspring. They tend to mature quickly and excel to the highest levels of Agility, Tournament Hunting and various Hunt Tests.
Raider would stand on point before he even knew a "whoa" command was. You could try to encourage him to break point and flush, but he would give you a quick glimpse and look back on point without moving.
Raider loved attention unless there was something to retrieve. When I would show him to people, I could not have a dummy in my back pocket or anywhere near. If he knew there was something to retrieve, that's the only thing he wanted to do.
Besides his many accomplishments, if I were to describe Raider in two words I would say " Big Heart". Raider had endless drive to retrieve and always worked very hard to please.
Raider is gone now, but everyone who knew him knows he was a very special companion. It was an honor to stand next to such a fantastic dog while hunting and campaigning. His natural abilities live on in the quality offspring he has produced for us to enjoy. Raider was a great friend, who will be truly missed but never forgotten. Condolences to Rick Gerth, Raider's best buddy and owner who made Raider available for the stud dog program.
Its been quite a journey!  - Terry Holzinger 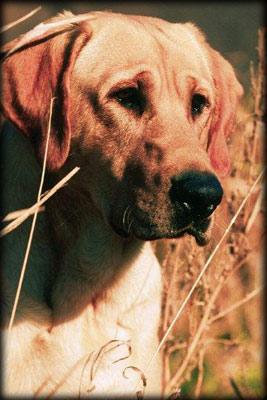 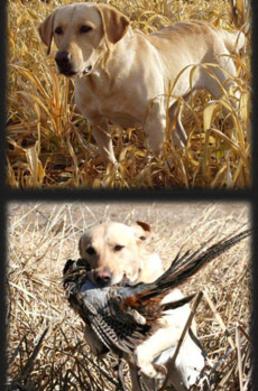 EBONSTAR LEAN MAC 1995 & 2000 NAFC, 1998 & 1999 CNAFC
Maxx's owners, Sherwin Scott and Patricia Shawver, bought the dog from Canadian John MacLean following the completion of a successful derby career. Maxx earned a total of 122.5 combined American and Canadian derby points. After the change of owners, Don Remein continued Maxx's training and he went directly from the Derby to the Open where he qualified for the 1993 National Open Championship as the youngest dog entered.
Don Remein was the hander for the 1993 and 1994 National Opens and in 1995 national Open the owner is shown as the handler. For each National Open 1996 through 2000 Mike Lardy was shown as the handler. Maxx was a finalist 97-99 in the National Open. The owner was listed as the handler in 6 National Amateurs with 2 wins and a finalist 3 other times. In addition too National qualifications Maxx was a two time double header winner. Maxx accumulated 109 open points and 56.5 Amateur points. In addition to his two National Amateur wins are two Canadian National Amateur wins.
Maxx is arguably the best sire the most prepotent sire of this era. Records show, in 2006, 8 dogs sired by him with 9 National wins. Five of these national wins occurred in the Canadian National Open and Canadian National Amateur. Names of titled offspring exceed 110 are too many too list here, but one bears mentioning. Chena River Chavez appears to have inherited the ability to pass on good genes to his offspring.
Photo by Sue Reynolds Courtesy of Retriever News 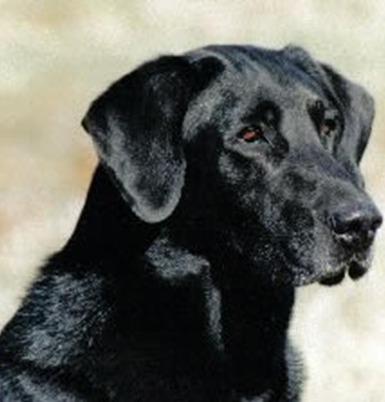 Special Thanks to Retriever News For Info and Pictures, Photo's by Sue Reynolds, Photo's by Terry Holzinger Photo's,  Photo's courtesy of Dan Hove 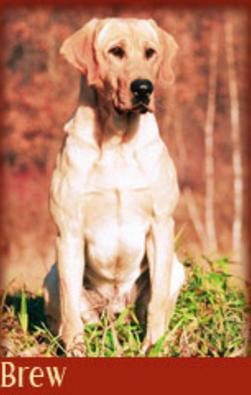 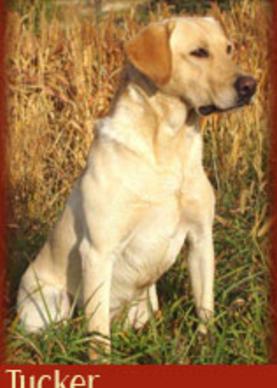